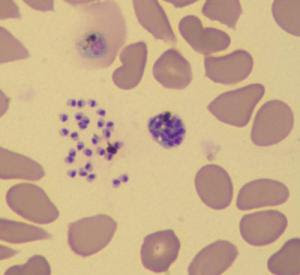 Malaria remains one of the most deadly infectious diseases. Yet, how Plasmodium, the malaria parasite, regulates its infectious cycle has remained an enigma despite decades of rigorous research. But now a research team led by a cell biologist at the University of California, Riverside has identified a mechanism by which Plasmodium intensively replicates itself in human blood to spread the disease.
"If this mechanism can be stopped," said Karine Le Roch, an assistant professor of cell biology and neuroscience, who led the research, "Plasmodium replication would cease or be severely inhibited, thus controlling the spread of malaria."

In the cells of eukaryotes, such as the unicellular Plasmodium and humans, DNA, which can be as long as two meters, is closely packed to fit into the cell's tiny nucleus. Huge complex proteins called nucleosomes facilitate this DNA compaction so that eventually the DNA is coiled in an ordered manner to form chromosomes.
Made up of histone, a kind of protein, the nucleosomes are repeating units around which the double helix of DNA gets wrapped and vast amounts of genetic information get organized.

In trying to understand how the malaria parasite multiplies in red blood cells, Le Roch's team found that in Plasmodium a kind of "histone crash" takes place -- a massive breakdown of histone that explains how the parasite can replicate extensively its DNA and coding gene in human red blood cells.

Kimberly said…
hello friends I really liked this information, a few days ago I read something similar on a site called wound infections, I would like to receive updates on this issue, as it is very interesting, thanks!
June 24, 2010 at 6:26 AM

discountcigarettesbox said…
In trying to understand how the malaria parasite multiplies in red blood cells, Le Roch's team found that in Plasmodium a kind of "histone crash" takes place -- a massive breakdown of histone that explains how the parasite can replicate extensively its DNA and coding gene in human red blood cells.
April 1, 2011 at 10:12 AM

beachbody coach said…
What I want to know is why you didnt think to include the other side of this issue? There are so many things that youre missing here that I dont see how you could actually form an intelligent opinion on the subject. Its like you didnt even consider that there me be another side here. Im kind of disappointed. try shakeology
July 4, 2011 at 4:07 PM

viagra online said…
Thank You a ton for writing such a wonderful piece of information. Keep sharing such ideas in the future as well. This was actually what I was looking for, and I am glad to came here! Thanks for sharing the such information with us.
November 25, 2011 at 9:13 PM