Scientists discover structure of a key enzyme found in HIV

Posted by Dr. Rolande on March 11, 2010
GLOBAL: Breakthrough could create better ARVs
The puzzle has been solved 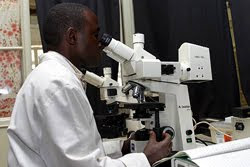 Photo: Gary Hampton/World Lung Foundation
NAIROBI, 1 February 2010 (PlusNews) - Scientists have finally discovered the structure of a key enzyme found in HIV and similar viruses, a breakthrough that has crucial implications for HIV treatment.
Researchers from Imperial College London, in the UK, and Harvard University, in the US, developed a crystal that could reveal the structure of integrase - an enzyme used by HIV to integrate its genetic material into a host cell.
Many researchers had tried and failed to unravel the three-dimensional structure of integrase, which is bound to viral DNA. When someone is infected with HIV, the virus uses integrase to paste a copy of its genetic information into the person's DNA.

The new study, published in the latest edition of Nature, a scientific journal, revealed how a class of life-prolonging antiretroviral drugs - integrase inhibitors - functions. The drugs work by blocking integrase, but for a long time scientists did not understand fully how the medicines managed to do this, or how to improve them.

"We now know how drugs that target integrase - such as Isentress [an integrase inhibitor produced by pharmaceutical company Merck & Co] - bind to and block integrase, meaning it is now possible to improve the drugs on the market," Dr Peter Cherepanov, of Imperial College London, one of the study's lead authors, told IRIN/PlusNews.

This is the holy grail of HIV research ... it opens a whole new door for manufacturers of HIV medication

"Now we have this information, drug developers can modify the available drugs to work better - for instance, to bind tighter to integrase," he said. "We will also be able to better understand and explain HIV drug resistance, since we now know how these HIV drugs work."

Using a version of integrase borrowed from a retrovirus similar to HIV, the researchers were able to grow a crystal after more than 40,000 unsuccessful attempts.

"This is the holy grail of HIV research," said Dr Matilu Mwau, a virus researcher at the Kenya Medical Research Institute. "It has the potential to increase the repertoire of drugs to treat HIV; it opens a whole new door for manufacturers of HIV medication."

"In the developing world we do not tailor-make drug combinations for HIV patients - we treat HIV from a public health perspective, where most people are put on a similar combination," he said. "More drugs available mean better chances for people to be put on second- and third-line treatment regimens where first-line drugs don't work."

Unknown said…
View the new documentary "House of Numbers" to see why questions about this must be raised and deeper issues about HIV and AIDS need to be discussed. Lives are at risk, and this is the first documentary with the worlds foremost authorities highlights the scientific problems with HIV testing, science, statistics, and why there is no cure. If sheds new light on a misunderstood phenomena. GO to http://bit.ly/bGwuST to see the trailer.