The long road to Esu

Posted by Dr. Rolande on May 20, 2010
First there was the volcano in Iceland impacting my travel and increasing an 18 hour trip to more than 48 hours.  Instead of New York, Brussels, Cameroon; I also touched down in Germany, Addis Ababa, Ethiopia, and the small but oil rich island of equatorial Guinea.  I arrived late everywhere I was supposed to be even by an African time scale.

In Douala, the luggage did not arrive when I had to switch to Ethiopian Airlines.  This switch was made after I had already paid my excess baggage fee to Continental Airlines.  Now Ethiopian Airlines wanted to be paid again or they would not put my luggage onto the convey belt.... not much I could do.

I was greeted enthusiastically upon arrival.  We proceeded to Bonaber to board the night bus to Bamenda.  The carry on luggage I had with me worried me because even though it would fit in the overhead compartment of an airline, it did not fit into the overhead of an African bus.  I had to put it under the bus with all the yams, bananas, chickens, and so forth, but I was reassured that no one steals luggage... well, there is always a first.

I arrived Bamenda with even less to carry.  My luggage was stolen.  A stop over at the police station to report the theft put us late onto the bus to Wum.  My Cameroonian collaborator was correct, the horrible 35 mile trip that used to take 5 to 6 hours was reduced to 3, because the pot hole road had been graded and made wider and flatter.

In Wum we took a 30 to 40 minute motorbike ride to Weh.  No one here knew I was coming, we used to have a sewing machine project in this village which we eventually turned over to the women of the village altogether.  I was greeted warmly with hugs, beer, and food.

The road commissioner from Esu, our final destination, visited Weh and offered us a ride in his car.  Half way there the car stalled and the engine would not start.  They pushed the car - without light in the pitch dark, not seeing a thing, they rolled the car into the ditch.... I jumped out fearing for my life.  Esu and the North West Region is volcanic with beautiful mountain landscapes.... we made it to Esu.  The men, most of them already drunk, invited us for more beer and then we walked in the dark to a compound and in the dim light of a kerosene lamp I saw five pairs of eyes staring at me.... no water, no light, no bathroom, or any privacy, a room everyone moved in and out.  I have seen a lot, but this was past my comfort zone.

The highlight of the three days, which I shortened to two, was the Fon of Esu.  Fons are the rulers, kings, traditional everything, and very revered by their respective subjects.  This Fon was different.  Not raised to become a Fon and young in age when he became Fon only two years ago; he is a man seriously concerned about bringing change and improvement to his people. 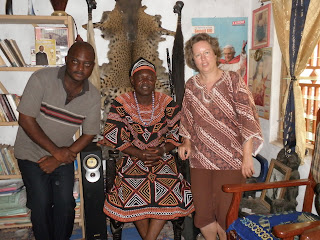 Fon Albert of Esu, left Polycarp Nji dreams of  opening a Health clinic in Esu by 2012 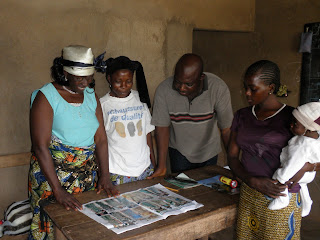 Women empowerment project Esu
For us on the board of AIDSfreeAFRICA the question is always how can we best help improve health and access to drugs.  With drug production now finally in a phase of realization, the question is what do we do to make sure that people like the 26 to 45 thousand souls in Esu - no one knows how many there are - how do we get the drugs and access to treatment into these remote villages?  It is obvious that the large Cameroonian cities such as Yaounde, Douala, Bafoussam, Bamenda to name most of them, will have access, but it is not cost efficient to get it into these villages, thus there will be nothing unless something is done.....

At the end of the day, what counts is the patients are getting the drugs and care they need.  As of now in Esu the answer to the question for adequat care is a resounding NO.

Chewachong Patience E.Akih said…
WHY the NO to Esu? Is it because of inaccessiblity or what? Esu deserves adequate health care. The community can be mobilised to work towards the realisation of that which is putting them at a disadvantage position. Thanks for kind attention and understanding.
Rev. Abraham K. Akih.
June 22, 2010 at 5:55 PM