Posted by Dr. Rolande on September 07, 2010
Actually production of IV fluids has been taking place in Yaounde and Mutengene for years now. SIPP, based in Yaounde has been supplementing the governments tender of imported IV fluids with up to 10% and would love to expand its production. AIDSfreeAFRICA is working on a deal of having SIPP produce urgently needed diagnostic reagents.

The Cameroonian Baptist Convention has been producing IV fluids as wellas bottled water, ointments, eye drops and antiseptic soaps, but is limited to production for internal use by their hospitals and clinics. 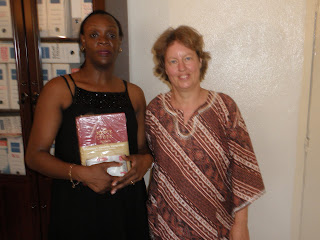 By far the most advanced production however, is taking place in Douala, Cameroon's industrial capital. Dr. Etame (left picture receiving a copy of the Merck Index through AIDSfreeAFRICA) has been producing malaria, cough and pain in form of syrups. she recently added vitamins and is in the process to produce solid oral tablets for malaria.

Producing solid oral tablets happens to be AIDSfreeAFRICA's definition of "drug production". However, a pharmaceutical industry needs more than one player to become reality. 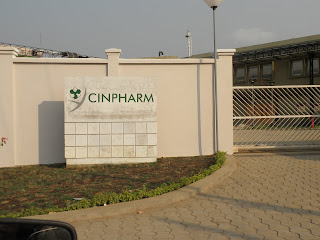 Cinpharm, a cooperation with the help of India based generic manufacturer CIPLA and a loan guarantees from the Germans is owned by Celestin Tawamba, generally known as the pasta king for his success producing past in Cameroon and exporting pasta throughout central Africa. At the time of my last departure from Cameroon Cinpharm was still hiring and training people to possibly run the complex production: the equipment, water purification, clean air, intake, storage, warehouse, quality control and quality assurance labs, and so forth. The company even features an auger spin coating machine. I wish we had access to this machine a couple of years ago when Hoffman La Roche offered us through their technology transfer initiative to spin coat one of their AIDS drugs. Unfortunately this initiative has been "completed" - that means terminated, for undisclosed reasons. As far as we know a company in Kenya is one of maybe some others who were able to take advantage of the initiative. 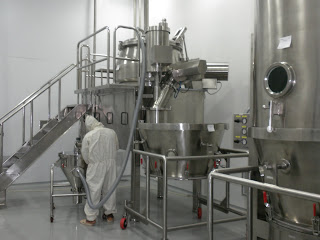 With three companies in the running, Cameroon may very well be the front runner for West Africa's emerging pharmaceutical production. AIDSfreeAFRICA is doing its best to support the efforts with GMP training and attempts to attract professionals from the industry to come to Cameroon and volunteer their time and expertise.

Takam Ida said…
i am a young holder of a degree in microbiology and a diploma in medical laboratory technology, i am interested in your program
March 11, 2011 at 1:27 PM

Unknown said…
as a cameroonian who is orienting a career path in the pharmaceutical industry, it is very encouraging to read this bearing in mind that i can return to cameroon and work in the industry...cheers guys good work

Unknown said…
as a cameroonian who is orienting a career path in the pharmaceutical industry, it is very encouraging to read this bearing in mind that i can return to cameroon and work in the industry...cheers guys good work...please follow my blog @http://lifesciencemtf.blogspot.com/
December 27, 2013 at 6:22 AM