The recent mass rapes in a mineral-rich area of eastern Democratic Republic of Congo underscore the urgency of a new U.S. law to certify consumer goods free of "conflict minerals" tied to the violence. The law may be hard to enforce but supporters have high hopes. 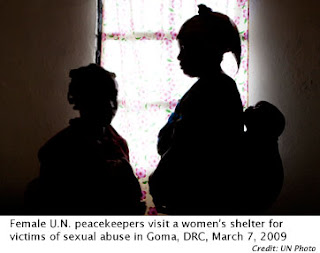 UNITED NATIONS (WOMENSENEWS)--The rape of approximately 500 women in eastern Democratic Republic of Congo in recent weeks has underscored the urgency of a new U.S. law intended to choke off an illicit mineral trade that helps finance and motivate some of the brutality.                [.....]

Margot Wallstrom, the special U.N. representative on ending conflict-zone sexual violence, called the new law a great idea at an Aug. 31 press conference in New York. She said she was trying to persuade European legislators to follow. "Hopefully we will find a global system and the U.S. is showing the way," she said.
Lawlessness and banditry rule in eastern Democratic Republic of Congo, where local and Rwandan Hutu rebels often fight each other and the government mainly for loot. Complicating matters further, at least 10 of the recent victims were raped by government soldiers, who sometimes also take part in the illicit mineral trade, the U.N. says.
Wallstrom said rebel leaders organized mass rapes as a reward for their troops and as part of their looting of villages. She added that the violence helped rebels assert control over mining areas, where many local men normally sell small amounts of minerals they find on their own.            [...]
Rape a 'Cheap, Effective and Silent Weapon'

"Rape in war and conflict is a cheap, effective and silent weapon and it is used exactly to terrorize and put fear in a whole society," Wallstrom said in the press conference. "It lasts for generations: when the children see this how can they ever feel secure?"

The new U.S. law is an attempt to prevent American consumers from purchasing cell phones, computers and even hybrid cars that are manufactured by U.S. companies using minerals bought from rebel-controlled mines. The law is buried in section 1502 of the financial reform bill, which was signed into law by President Obama a little more than a week before a four-day reign of terror began for the rape victims in Luvungi and 12 other villages in North Kivu province on July 30. These were followed by attacks in South Kivu.  [...]
The rebels have found a ready market for their loot with legitimate companies mostly in the West and China, as documented by years of U.N. investigations. The proceeds from these sales are fueling the deadliest conflict since World War II, with as many as 5 million people killed over the past decade and more than 200,000 women violated.
The law calls on U.S. firms, including brand name consumer electronics makers, mineral processors, jewelers and automobile manufacturers, to report annually to the Securities and Exchange Commission if their products use any gold, tungsten, tantalum or cassiterite (tin ore) that was either directly imported from the Democratic Republic of Congo or smuggled through nine neighboring countries.

The Most Ubiquitous Metal  Tantalum is perhaps the most ubiquitous of these metals since it is found in electrolytic capacitors, which are inside nearly all cell phones and personal computers. Companies using such minerals must demonstrate how they are tracing the supply chain beginning with the original mine.  [...]

Jewelers of America lobbied strenuously against inclusion of Section 1502 in the financial reform bill, arguing that it would be too difficult to implement. The New York-based industry group said it will also be expensive as the law requires companies to hire outside auditors to prepare their reports to the Securities and Exchange Commission.

But firms that can prove their products do not contain illicit minerals from the Democratic Republic of Congo could gain a competitive advantage with consumers. Seeing the new law coming, Intel and Motorola--two electronics giants--in June began developing a process to audit their tantalum purchases.

John Crawley, an executive committee member of the Tantalum-Niobium International Study Center, based in Lasne, Belgium--the Democratic Republic of Congo's former colonial ruler--also hailed the law.
"I think companies do have a responsibility to trace and audit their supply chains," Crawley said, adding that while gold may be difficult to trace, tantalum was not. "I believe that we can easily certify the supply chain and we in the tantalum industry have been further along in this process."   [...]

The U.N. reported late last year that a mineral company begun by Crawley's father in Hong Kong, and on which Crawley is a board member, used a "front company" and a suspected smuggler to hide purchases of rebel-controlled minerals. The U.N. backed up its case with numerous documents. The Washington-based Enough Project also produced shipping records that suggested that Crawley's own company in Nevada was importing conflict minerals.   [...]

Sasha Lezhnev, a consultant to the Enough Project, the law's chief lobbying group, noted that the law had seized the attention of CEOs and corporate legal departments and expressed confidence it would be enforced. He said nongovernmental organizations like Enough would help companies set up a certification regime.
blood diamonds Coltan Congo minerals war weappons

I come across too often in discourses of 'illicit mineral' I think term in Congo context is much more complex than it seems. Eastern Congo do not process mineral, all raw mineral is exploited by three different sources. Locals, they have been in mineral business for generations, arms groups, they are many in number often worked with locals, and only one multinational Corporation--that is Banro Corporation,listed in Toronto, mainly mining Gold, from world´s largest gold reserve, that is Twangiza, Eastern Congo. I have considerble interviews with many associate with these 3 categories, including one rebel group. I was mostly apprehended by acts of Canadian registered Banro Corporation. Their mine is situated in Twangiza, very interior Part of East Congo, one need a 8wheels jeep to get there as roads were very pity conditions. Most of their excutive rides and vip rides taken place using helicopters i was told.
Before embarking to their mine site I visited their head office, localted in Bukavu, the captal of south Kivu. Most of the supervisory staff were from South Africa. I told them I was from Sweden, and would like to visit their mining area, to have a scoial dialogue with the community, and some of their workers, as I was interested in exploring Banro´s CSR responsibility on the of ground as well as bio diversity and environmental affects that has been caused by commercial mining. I was discouraged by the staff saying that after 4 pm roads were closed, area is in constant attacks by banditos, road is very bad and so on...Motivated more, depsite all i decided to travel hiring a largest jeep. Soon I found that none that was told has any truth, but discourage me coming to Twangiza. I met the community. Women cried... they said that their land is being grabbing by Banro Corporation. One worker, a congolian lady, showed me a file, " I was asked to visit all houses and land own by the community in that mountain.. (she pointed out a hilly agricultural area full of small houses) to do a survey how many trees they have in their garden, how many rooms they have, by Banro Corpn". I spoke with some other members, "our only income had been for many years, informal mining (gold)and agriculture, we do not need big roads. Now Banro wants all they are grabbing our land. some of them that they have already grabbed land, still have not got compensation. We are illiterate, old, it is difficult for us to settledown in any area, this is our land for generations. Banro told us that they give employment. But mining employees they brought from trucks from outside, not from villages around.
I was given by a local radio station a petition signed by 250 locals what Banro is doing to their community. Few 100 dollar bills that I have left, I gave 15 odd scholarships so that 15 children can finish their primary school, which cost4 and 7 dollars a month. I thought these children can one day fight against all these powers,including those powers still abusing right of Congolese villages in Twangiza.Why we in the West talk of HR from one side and not scritunize our own that bring more missary and poverty. Also why is it all including Margarit Wallström just not talking of these powerful yet deviant actors who use weak governments and army brigadiers to pursue their commercial mineral intetrest in East Cong????? mail me on nilani at telia.com. Dr Nilani Ljunggren De Silva, (PhD)if you want more information.
March 15, 2011 at 2:20 PM