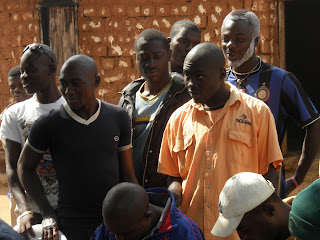 The faces reflect the seriousness of the situation. I always heard stories that African's don't want to be tested for HIV. Not in Esu. People were fighting to be able to participate and to get their hands on one of the few precious tests. The company has already promised 1000 more free tests. Upon hearing the news, the fon or ruler of Esu responded: "bring 3000 tests". 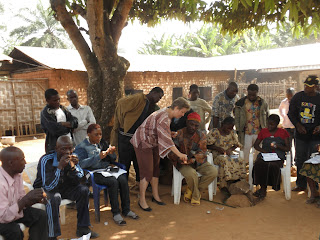 Twenty people sat down in plastic chairs. Without tables they balanced the different parts on their knees. The test is new, uses saliva and no needles to prick to get blood.
Everyone receive AIDS counseling from AIDSfreeAFRICA collaborator Polycarp Nji, a Esu man who works as a nurse in far away town of Limbe. Three people tested positive and now know that fact and can start living accordingly. Fifteen people reacted seriously relieved, and hopefully start living their life using precautions.
Immunoscience, the maker of the test is working with AIDSfreeAFRICA to distribute the test in Cameroon.

In a separate meeting with 25 HIV positive people, AIDSfreeAFRICA was able to encourage these rather hopeless people to form an association to give them a voice and some support.
I was rather speechless when they told me that the district hospital in Wum had no antiretroviral drugs for the past two month. They asked what they should do? We know that people who stop taking drugs catch opportunistic infections and the death rate goes up. I promised to go to the provincial hospital in Bamenda and ask were the drugs are, and if this will not help to talk to the Minister of Public health in Yaounde.

The answer was almost as shocking as the fact itself: in Bamenda I was told that CINAME, the central government run distribution agency - the only institution in Cameroon allowed to handle import and distribution of AIDS drugs, was performing inventory in the month of December and that during that time they will not send out any drugs as not to confuse the counting. That of course means that the North West Special Fund that is responsible for Esu needs to order more drugs in October to have sufficient stock for the rest of the year. I will inquire next trip how we can make sure Esu has the drugs in stock.

In the mean time Christian, the newly hired "chief of post" or head administrator of the Esu government health clinic joined AIDSfreeAFRICA's meeting with HIV positive people. He offered to go to the district hospital in Wum once a month to pick up the drugs for every HIV positive member of the newly formed "Esu Family Health Association". This is a 2 hour trip that cost $4 one way. In Africa, the AIDS drugs are free but people can not afford the transport. This will be a big incentive for HIV people to come forward and join.
AIDS based Esu saliva test

Anonymous said…
I am really impressed with this write up.It is a good description of the actual situation of most of our villages and Esu in particular.If Christian actually does what he promises,it will be a leap forward.
Dickson Kah
Yaounde-Cameroon
February 3, 2011 at 3:32 PM

Dr. Rolande said…
Christian is actually doing what he promised and it is working, he is picking up the AIDS drugs for the members of the Esu Family Health Association. Now he is working on organizing trips to the hospital to get the needed CD4 count done and makes sure the results are obtained and written into a patient's book so it can be known. An important number to make sure people get the right treatment. Thank you Christian!
July 23, 2011 at 6:57 PM