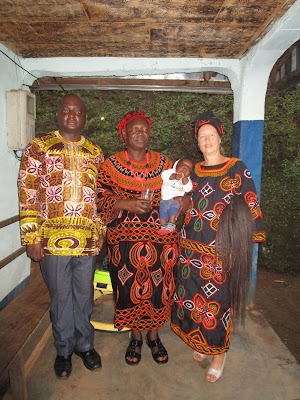 Sunday June 21 Polycarp throws me a fun and thoughtful party for AIDSfreeAFRICA  10th anniversary. The dress I wear in this picture is a personal gift from him. He (left) was happy that I truly loved the event. (Right) Fon Albert Kum-II


Jul 2nd, 12:27pm two day before his so called suicide Polycarp texts me this:

WHEN YOU HAVE TIME ONLINE PLEASE KINDLY FORWARD TO ME PICTURE OF THE PARTY IN ESU
Friday night, the 3rd of July at 9 PM I arrive in Esu accompanied by two Gendarmes and my lawyer Jerome Mbaku from Horizon Chambers. We were on a mission to find "bad drugs" which I stood accused to have brought to Esu.
We are waking HRH Fon Albert. His wife kindly brings us food. Polycarp did not arrange for us to sleep or anything. We are comfortable in the Palace. There is much to talk about. Polycarp is sorting papers from the latest Vitamin Angel workshop. At 11 PM he takes the Gendarmes to the hotel and me to Thomas Chu's house where his clinic staff sleeps. He told me "Dr. there is more to this investigation than you think". I get worried and we agree to meet at 6 AM, an hour before the meeting in the clinic. Polycarp is very clear that he is not under investigation. We say good night.
I know he is not a morning person, so when he does not show at 6 AM I am just lightly annoyed but not alarmed. I go to the hotel since I know the Gendarmes and my lawyer will not know how to find their way around. I pick them up and take them to the clinic on foot. We send the chief of post to find Polycarp. It is 8:30 AM. He comes back empty handed. Polycarp had not passed the night in his house nor his uncles place. We do not have much time to wonder. A pregnant woman comes running, shouting "Gendarmes, Gendarmes, a man is hanging." We follow and I see Polycarp hanging in a tree a stone throw away from the clinic, his face averted from us. There is nothing he could have climbed onto to jump into the rope.... the place is not disturbed. He is only a foot above ground. The tree's branch not strong.... We never find a suicide note. But the village elders later rule it a suicide blaming Polycarp's family to have caused this trouble that Polycarp paid for.  Later we learn that Polycarp had spend from 11 PM to 2 AM in the clinic on his lab top computer (which he told me was broken and he needed a new one from me.... )
He died Saturday July 4 between 2 AM and 8:30 AM when we found him hanging in a tree.
The village got upset. A rumor spread instantly that I had brought Gendarmes to Esu because Polycarp owes me money and I wanted it. I received death threats. My friends in Bamenda got calls and visits from people asking for me.... it was scary.
Many Esu people do not believe the suicide. He was so busy in his community. He had the clinic. He was responsible for his mother,  younger siblings, his young wife and two children, one of which was a new born. He did not behave stressed that evening.  There seems to be not much of a proper investigation. The mother and wife were told not to cry for him. I was told that due to suicide he would not properly buried, just thrown in a hole and covered. It is a big no no to kill yourself. But if he did not kill himself, who did?

Polycarp, Umaru and Dr. Wringo, the Health District Officer in Wum told me the clinic was on its way to legalization. Why did we find a letter from the Hon. Mr. Andre Mama Fouda saying "this clinic should not be operational"? In those 24 hours I found out so many things that Polycarp was not truthful about. Was that his downfall? We may never know.

Why did Aliu Umaru visit him during the few days between the party and his death. And why did he audio record his conversation with Polycarp. Did he know Polycarp would not be around to speak up? Why did Polycarp repeat the words I said to Aliu Umaru's wife, that there is more to this investigation than we know? Will we get answers to these questions?
clinic death Esu Fon ALbert Kum II Gendarmes Polycarp R.I.P. suicide

Anonymous said…
RIP Polycarpe Nji. I never met him but I was very sad at his mysterious passing. He was much too young and it is so tragic for his family.
November 13, 2015 at 4:36 PM

Madonaldo said…
It's been weeks that I've been in contact with this spell caster. He was recommended to me by sharon moore. Dr Abalaka help me out with my finances and also a favor spell. His Email Address is dr.abalaka@outlook.com. We've been very good friend and he rendered so many services like Love Spells, Luck, Money Spells, Health, WellBeing, Protection, Healing, Curses, Hex, Breakups,NEW! Combo Spells, Authentic Voodoo Spell, Business spells, Health/Healing spells,Curse removal, Job spells, Healing from all kind of diseases, Love binding, Barrenness(need a child), Need love, Lotto spell,Promotions spells Success spell, Money rituals, winning court case, Divorce spells, Low sperm count, Infertility in women, Breast enlargement/reduction,Penis enlargement/reduction and so many others. Wish you all the best
September 16, 2016 at 10:08 PM